The onion is a fairly common vegetable, but its medicinal properties are quite uncommon. Hailed as antibacterial, antiviral, antioxidant-rich, and great for fighting congestion, in addition to being tasty, it is mighty against the common cold. But tastiness might be all we're after, and who doesn't covet thy neighbor's onion soup when it is ordered in the restaurant setting? Just me? Well, fine, then.

Here is an onion soup even the meat-averse can enjoy.

Heat 2 tbsp. extra virgin olive oil and 2 tbsp. unsalted butter (or just more olive oil for vegan/lactose-free types) in a large pot over medium-high heat. Stir in 5 thinly-sliced sweet onions (Vidalia, Mayan, etc.), 1 sliced clove of garlic, ½ tsp. dried thyme, and a heavy pinch of salt. Cook, stirring, for about 15 minutes, until the onions get mushy and maybe slightly browned. Turn the heat down to medium-low, cover, and cook for about 40 minutes, stirring every 3 or 4 minutes, or when the next song plays on your playlist. Turn the heat up to high and stir in 2 tbsp. dry sherry or Cognac and 2 tbsp. soy sauce. Stir and reduce for about 4 minutes. Throw in 2 bay leaves, 4 c. vegetable broth, ½ tsp. ground mustard seed, and a dash of red wine (optional). Bring to a boil, then cover and simmer over low heat for 20 minutes. Turn off the heat and pull out the bay leaves. Season with salt, pepper, and another dash of soy sauce. Garnish with parsley, if you have it.

Your soup is ready, but if you want to go the full French: Ladle soup into an ovenproof bowl, place a piece of stale, crusty French bread in it, and top with sliced or grated Gruyere, Swiss, or Fontana cheese. Place bowl under a broiler for a few minutes, until the cheese is melted and browning. Mmmmm.

Yes, I'm aware that this soup takes a while to make, but what's nice about soup is that it freezes magnificently. So, you can make a whole bunch, freeze it, and reheat it whenever you're in need of that particular onion soup fix. Great for helping to fight that cold, too! Now, where did I put those audition sides?... 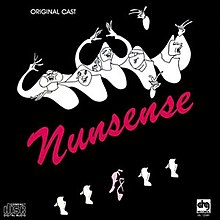 Nunsense is a musical by Dan Goggin. Premiered at Cherry Lane Theatre in New York City on 12 December 1985.
Posted by Kevin F. Story at 02:47

Email ThisBlogThis!Share to TwitterShare to FacebookShare to Pinterest
Labels: In Absentia Gluten, No Moo Juice, Vegan to the Max, Vegetarian Delight