A Funny Thing Happened on the Way to the Falafel

Ah, falafel. I've been a fan of the falafel ever since Jason Reitman bought one for my then-girlfriend (now ex-wife) after a talk he gave at Wesleyan University. Sure, maybe I won't make films like Jason Reitman, but at least I can make a falafel.

It seems like there is one sort of "set" method of making falafel, so here it is in a healthier baked form, as inspired by Mark Bittman, Alton Brown, and the annals of culinary history.

Soak 1 lbs. chickpeas (garbanzo beans) in a bunch of water, at least two inches above, overnight, or for 12-24 hours. (Chickpeas will crumble under finger pressure when ready.)

Preheat your oven to 375°F. Drain the water and throw the chickpeas into a food processor with 1 onion (chopped a bit), 2 cloves of garlic, 1 tbsp. ground cumin, 1 c. chopped parsley, a dash of cayenne powder, 1 ½ tsp. salt, ½ tsp. black pepper, 1 tbsp. baking powder, and the juice of 1 lemon. Pulse intermittently until the mixture is minced but not puréed.

Brush 2 tsbp. olive oil onto a sheet pan (or two, depending on how large your pans are). Roll mixture into balls about 1 ½ inches in diameter, smoosh slightly into a patty, and place on the pan. Brush the tops with another 2 tbsp. olive oil. Bake in the oven for 10 minutes per side. They will be golden brown and delicious before you know it. (Well, I guess you'll know it, if you've set a timer.) Store in your fridge wrapped in tin foil (for easy reheating in your toaster oven, perhaps) or in your freezer in air-tight plastic. Serve on some lettuce with some cucumber, tomato, and the like... oh, and pita! You must have pita. And tahini sauce, of course. Get some from Trader Joe's. You won't be sorry. 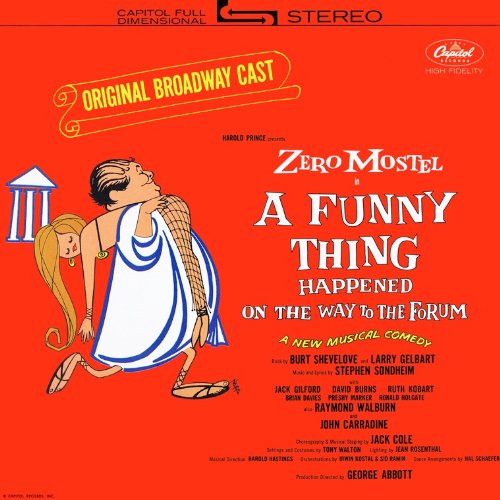 Title inspiration: I realized I'd already used the best option, Fefu and Her Friends, for something else, so today's second-best option is A Funny Thing Happened on the Way to the Forum, a musical comedy written by Burt Shevelove and Larry Gelbart with music and lyrics by Stephen Sondheim. Premiered at the Alvin Theatre in New York City on 8 May 1962, directed by Jack Cole, produced by Hal Prince, starring Zero Mostel, and featuring staging and choreography by Jerome Robbins, though he wasn't credited. It was Sondheim's first big hit as a composer and won the Tony award for Best Musical as well as four others.
Posted by Kevin F. Story at 00:05

Email ThisBlogThis!Share to TwitterShare to FacebookShare to Pinterest
Labels: In Absentia Gluten, No Moo Juice, Vegan to the Max, Vegetarian Delight