Lend Me a Latke

The holidays are here, and with the holidays comes holiday food! Growing up in New York, we were exposed to a whole slew of treats; my Hungarian great-grandmother, for example, passed down the tradition of making palachinkas and half-moon cookies. The family of my best friend growing up were a typical Judeo-Christian-agnostic mix who threw some of the best holiday parties I've been to. So it turns out that my favorite holiday food of all might well be the latke.

For the uninitiated, latkes are potato pancakes, essentially. This recipe is inspired by the latkes made by my best friend's mom (she liked to throw in carrots), and they're sure to be a delight no matter what holiday you choose (or don't choose) to celebrate.

Peel and wash 3 russet potatoes and 2 carrots and grate them using the largest holes. (Or, to save time and muscle, use a food processor!) Also grate 2 small onions (or one regular-sized onion). Put the potato-carrot-onion mix into a fine-mesh strainer over a bowl and squeeze out as much liquid as possible. Let that sit for a bit.

Put a pan over medium heat and drop in 2 tbsp. vegetable oil. 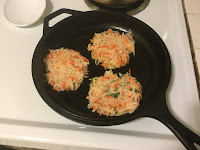 Pour out the orange liquid you drained. You should be left with a thin layer of potato starch! Mix the starch and the potato/carrot/onion together with ¼ c. flour, ½ tsp. salt, ¼ tsp. black pepper, 1 tsp. baking powder, and about 4 sprigs of parsley (finely chopped; about 2 tbsp. or so). Use a ¼ c. measuring cup and a fork to measure out each latke and place in the pan, pressing them down with the fork until it's even. A few minutes on each side, and presto! Let them drain a bit on a wire rack or paper towel before serving immediately with your choice of sour cream or applesauce. (There's a debate about which is better or more appropriate. Just eat what you feel is best.)

Wishing you a Merry Christmas, a Happy Hanukkah, a Prosperous New Year, and here's to a little more Peace on Earth than we currently have.

Title inspiration: Lend Me a Tenor, a farce by Ken Ludwig. Premiered (with the title Opera Buffa) at the American Stage Festival in Milford, New Hampshire, on 1 August 1985. First presented with the current title at the Globe Theatre, London, on 6 March 1986, by Andrew Lloyd Webber, of all people. It won three Tony awards during its Broadway run in 1989.
Posted by Kevin F. Story at 18:38

Email ThisBlogThis!Share to TwitterShare to FacebookShare to Pinterest
Labels: A Lovely Brunch, No Moo Juice, Vegan to the Max, Vegetarian Delight