Seven years ago, I took a road trip. It was a sort of whirlwind affair in late August, just before I was meant to be rehearsing for the Long Island premiere of Dracula, the Musical. My then-girlfriend and I traipsed halfway across the country, going from New York through Pennsylvania; having an impromptu picnic of wine and cheese on the corner of someone's farm in western PA after we had to push my car out of a small ditch; stopping in Cleveland for a couple of days to visit the Rock-n-Roll Hall of Fame; making our way to almost-Detroit to visit Marvin's Marvelous Mechanical Museum (inspired by Tally Hall); cutting across Michigan and through Indiana to reach our far goal of Chicago, where we spent a few action-filled days doing as much as possible; making an epic drive back east to Altoona, PA, in order to see Horseshoe Curve (I'm a slight train enthusiast); stopping in York, PA, to stay the night at my ex-girlfriend's place (we were all still good friends); and taking a day to visit Philadelphia before finally heading home.

We ate fantastically along the way, stopping in dives and fancy places all throughout. The pinnacle was a ten-course tasting menu at Moto (ground zero of molecular gastronomy) in Chicago's Meatpacking District. But a close second, I would say, was eating at the historic City Tavern in Philadelphia. It was there between the walls against which once echoed the voices of our Founding Fathers that I had, for the first time ever, a slice of anadama bread. 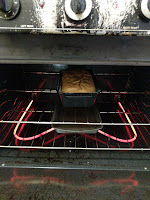 Anadama bread is made of cornmeal, molasses, and flour. There are unconfirmed stories about how the bread got it's name, many of which involve a man who says something along the lines of “Anna, damn her!” I have had a preponderance of cornmeal lately, due to a shipment I ordered after discovering that the supermarkets of Los Angeles were no longer stocking stone-ground stuff. A lot of cornmeal pancakes and johnnycakes have been made when I've been home over the past several weeks. Needing a change, I remembered my time at City Tavern and went looking for a suitable recipe for anadama bread.

Yes, it's a yeast bread that needs an hour and forty minutes of rise time, but if you have the time, it's worth it. It's excellent served warm, toasted, with butter or jam. I'll be taking a few slices with me to rehearsals this week!

Title inspiration: A Little Night Music, a musical by Stephen Sondheim and Hugh Wheeler. Premiered at the Shubert Theatre in New York City on 25 February 1973, directed by Hal Prince. It won a Tony award for Best Musical.
Posted by Kevin F. Story at 14:10